FED CUTS RATES A SECOND TIME THIS YEAR, ARE THEY FINISHED FOR NOW?

▪Despite the uncertainty we’ve witnessed, the MACROCAST™ score is not deteriorating. The model continues to suggest a low probability of recession and/or a major bear market in the near term.
▪The Federal Reserve cut the fed funds rate by 0.25%, marking the second rate cut this year. The reduction was expected, and the market is already looking ahead and expecting one more cut before the end of the year.
▪However, another rate cut is far from certain. The Fed may have a hard time making the case for further easing thanks to solid economic reports out of retail sales, housing and unemployment.
The second rate cut has usually been bullish, with the S&P 500 rising an average of 18% over the following 12 months.

Last week, the Federal Reserve reduced the fed funds rate by 25 basis points (0.25%). This is the second rate cut in as many meetings and puts the overall fed funds target rate between 1.75%-2.00%. In a statement, the Fed conveyed a willingness for further cuts if the economic data worsened to keep the economy expanding. Below is an excerpt from the statement released on September 18th:

As the Committee contemplates the future path of the target range for the federal funds rate, it will continue to monitor the implications of incoming information for the economic outlook and will act as appropriate to sustain the expansion, with a strong labor market and inflation near its symmetric 2 percent objective.
In determining the timing and size of future adjustments to the target range for the federal funds rate, the Committee will assess realized and expected economic conditions relative to its maximum employment objective and its symmetric 2 percent inflation objective.
While there was some dissent among members, the market is expecting more action. The fed funds futures market is currently projecting a 58% chance of a rate cut at the next meeting (chart from CME Group): 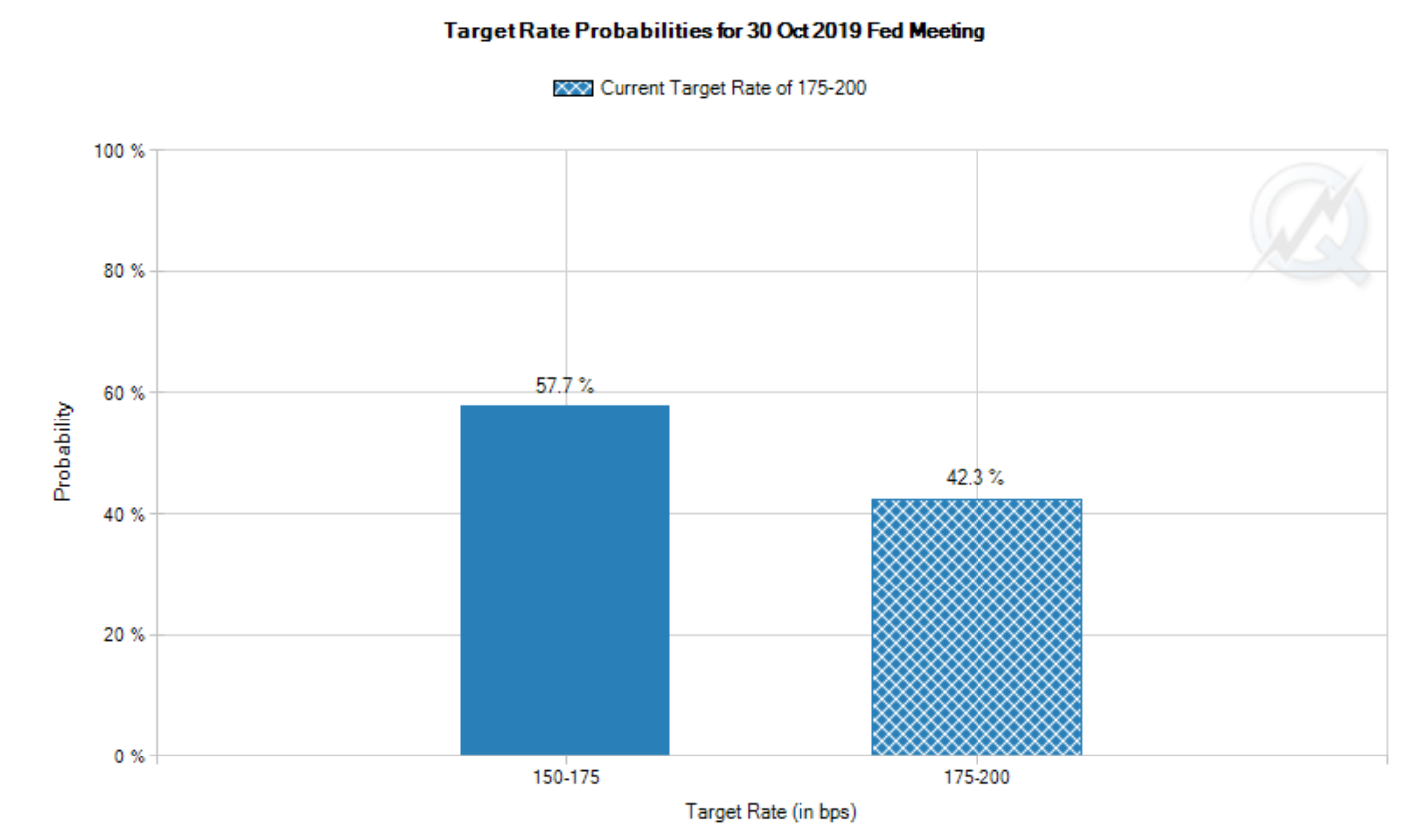 The case for no ADDITIONAL rate cuts:
Solid numbers in the key economic indicators

Although the market is preparing for another rate cut, it is not a foregone conclusion. One reason is the robust economic data in crucial segments of the economy. Three indicators we regularly evaluate—retail sales, claims for unemployment and housing—are all at or near cyclical records.

The consumer is spending. Real retail sales hit another all-time high in August, and the previous month was revised higher. Year over year, retail sales are up 2.3%. This metric is arguably more important than ever, as the consumer (as well as government spending) has become a more critical component of economic growth (chart from Blackrock): 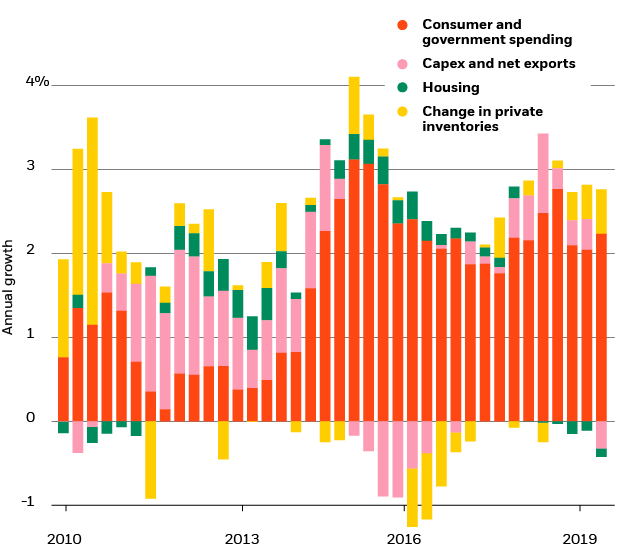 The job market remains robust. Initial claims for unemployment remain near historic lows. Recall that initial claims are a leading indicator, and they tend to bottom and begin rising months ahead of a recession:

The housing market has recovered. Perhaps in response to lower mortgage rates, housing starts and permits have perked up after 18 months of weakness. Housing starts are at new expansion highs.

Even if the Fed takes no additional action, two rate cuts might be enough for the market.
According to Ned Davis Research, previous periods after a second-rate cut have on average been bullish, with median gains of 12 and 18 percent over the following 6 and 12 months, respectively. The last 2 instances were negative, but those have been the exception. Rate cuts in 2001 and 2007 coincided with the start of a recession, but we do not believe this is the situation now.
In fact, when the first two rate cuts were each only 0.25%, the market was higher in every instance 6 and 12 months later. This lack of aggressiveness by the Fed suggests they believe we are in the midst of a mid-cycle slowdown and not the onset of a recession (from Ryan Detrick): 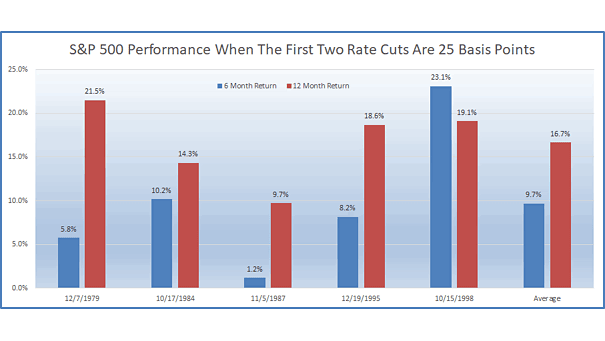 One more cut in 2019 is probable thanks to geopolitical concerns

There is a case to be made for further easing and an additional rate cut this year. First, inflation remains tepid, with multiple measures coming in below the Fed’s 2% target. Second, although it may be stabilizing, global manufacturing remains weak. Chairman Powell summarized the geopolitical concerns in his press conference last week:

Since the middle of last year, the global growth outlook has weakened, notably in Europe and China. Additionally, a number of geopolitical risks, including Brexit, remain unresolved. Trade policy tensions have waxed and waned, and elevated uncertainty is weighing on U.S. investment and exports. Our business contacts around the country have been telling us that uncertainty about trade policy has discouraged them from investing in their businesses.

The last sentence highlights the greatest concern. If businesses are refusing to invest due to “uncertainty” then that can depress capital investment and weaken GDP growth. This puts the economy in a more vulnerable position for an economic shock. With the economy not functioning at full capacity, such a development could tip the balance and push us into recession.

Despite the solid US data, we think the uncertainty around trade, Brexit, and recent escalations in the Middle East are enough to warrant another 25-basis point cut before year end. With a positive MACROCAST score, we view Fed action as an insurance policy, and previous mid-cycle adjustments have historically led to a positive market environment.

All information is based on sources deemed reliable, but no warranty or guarantee is made as to its accuracy or completeness. MACROCASTTM is a proprietary index used by Corbett Road Wealth Management to help assist in the investment decision-making process. Neither the information provided by MACROCASTTM  nor any opinion expressed herein constitutes a solicitation for the purchase or sale of any securities, and should not be relied on as financial advice. The phrase “the market” refers to the S&P 500 Total Return Index unless otherwise stated. The phrase “risk assets” refers to equities, REITs, high yield bonds, and other high volatility securities. Past performance is no guarantee of future results.