MARKET RALLIES WHILE THE FED TAKES A PAUSE

THE RISK OF AN AGGRESSIVE FED HAS DROPPED

They got the message from the market. The combination of last quarter’s market decline and recent weakness in key economic data have pushed the Fed to hold off on more interest rate hikes.

Respected Fed watcher, Tim Duy, suggests that if the economy slows down enough, the next move could be a rate cut:

The Fed is out of the picture through at least the first half of this year as central bankers work to understand the path of economic activity going forward. Of course, we will all be doing the same. As it currently stands, there is a widespread expectation that growth slows in 2019. The ultimate degree of slowing, however, remains the key question. Enough to keep the Fed from thinking they need to snug up policy a little tighter? Or enough to prompt a rate cut? Still unknown, but with inflation failing to live up to expectations it does seem that the Fed has a fairly high bar to a rate hike and a low bar to a cut.

This makes sense. The Fed was likely too aggressive in raising rates last year given the global economic slowdown that was already unfolding. They realized this in January and are now more willing to take a wait-and-see approach.

We believe this change in the Fed’s outlook has a lot to do with the market’s strength through the beginning of the year.

BUT IS THIS JUST A BEAR MARKET RALLY?

Whenever stocks rebound after a big drop, you tend to hear pundits with a bearish bias suggest that we are experiencing a “bear market rally.” This time has not been any different, and there is the suggestion that the recent move up in stocks is just a pause in the selling or a way to suck investors back in before the next big drop.

While we can’t rule anything out, several factors dispute this call and suggest this is more than a temporary rally within a new bear market. These indicators show the rebound could continue in the months ahead.

First, the market is back above its 200-day moving average after a significant drop. This has resolved bullishly in the past, and this has never occurred during a bear market (from bullmarkets.co):

*Please see important disclosures at the end of this article.

Second, the market achieved “breakaway momentum”, a metric developed by former Merrill Lynch Market Analyst Walt Deemer. Breakaway momentum compares the number of advancing stocks on the New York Stock Exchange to those that are declining to measure market breadth and momentum. It is a powerful upside move that peaks at the beginning of a market advance. This indicator has never peaked during a bear market (from the Fat Pitch Blog): 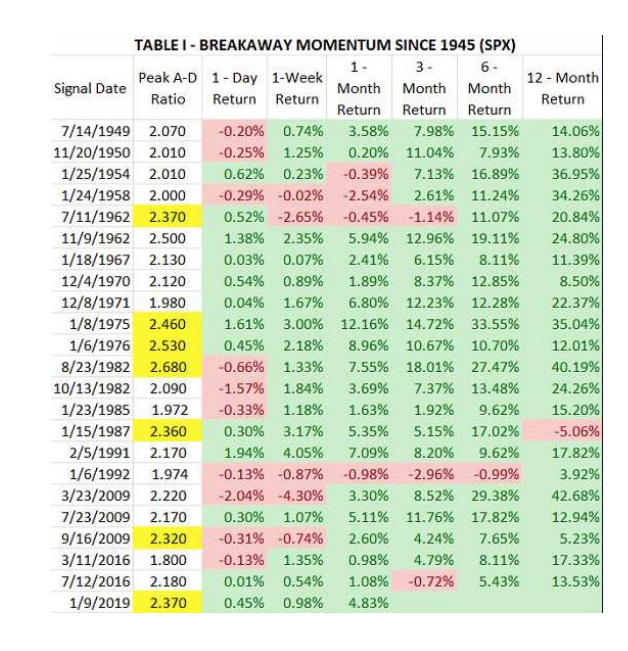 Finally, the S&P 500 just registered extreme “overbought” status. This measure considers the number of stocks trading above their medium-term moving average (50 days in this case).

The underlying idea is that “overbought” stocks need time to consolidate after a big run up, but the following table (from LPL Financial) shows that in certain cases, overbought can lead to additional gains, or at the very least, minimal losses up to six months later. Again, this has never triggered inside a bear market: 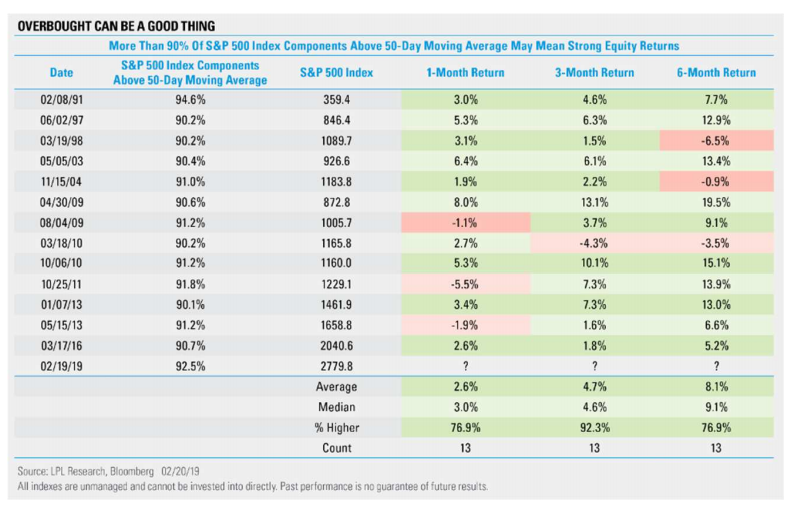 BIGGEST RISKS ARE ACROSS THE OCEANS

With the Fed on hold, the remaining risks to the market are international. China and the potential fallout from Brexit remain the key concerns.

We discussed trade at length in our December Macro Musings and not much has changed in that regard. The United States and China are in continued negotiations, and we expect some sort of resolution in the coming months.

A lot has been written about Brexit, and instead of rehashing the details, we refer you to this article from the BBC. While lengthy and written for residents of the UK, it covers every angle:

Our focus here is on how Brexit may impact the stock market. Although the economy of the United Kingdom is not substantially large (3.3% of global GDP), it is still the 5th largest in the world, and the peripheral impacts to other economies, like the remaining countries in the EU, cannot be underestimated. T

he biggest worry is the so-called “Hard Brexit”, where the UK leaves the EU on March 29th with no deal. This could create tremendous chaos in the short term at borders, ports, and businesses. The economic impact would be immediate.

What is less clear is how this would affect the market. Investors have at least considered the possibility of a Hard Brexit, so the market may have priced this in to a certain extent. Should this scenario come to fruition, we cannot assume that there would be a major selloff. The best evidence for this is how the market reacted when the vote to leave took place.

In late June 2016, the UK voted to leave the European Union. In reaction to the surprising result, the S&P 500 sold off 5% over the next two days. It then proceeded to rally for the next 32 months before the next 10% decline.

The fact is that we are in unchartered territory. While the risks are known, the potential impact of the realization of these risks remains unknown. Still, the market reaction to the initial Brexit vote reminds us to not assume doom for equities. As we do with all headline-grabbing events, we will analyze the data and assess the impact through MACROCAST™. If we see continued deterioration, we will take action as needed.

All information is based on sources deemed reliable, but no warranty or guarantee is made as to its accuracy or completeness. MACROCASTTM is a proprietary index used by Corbett Road Wealth Management to help assist in the investment decision-making process. Neither the information provided by MACROCASTTM  nor any opinion expressed herein constitutes a solicitation for the purchase or sale of any securities, and should not be relied on as financial advice. The phrase “the market” refers to the S&P 500 Total Return Index unless otherwise stated. The phrase “risk assets” refers to equities, REITs, high yield bonds, and other high volatility securities. Past performance is no guarantee of future results.